To celebrate Nate and Jo making it to the Mississippi, I pulled together some river songs from the late great John Hartford. (Keep up with Nate and Jo’s adventures on Chasing 70.)

While I’ve been a big fan of the late great Hartford since I was a tot watching The Glen Campbell Show (faves include I’m still here, Aereo Plain, Tall Buildings, Joseph’s Dream and this reggae classic), it’s his river songs that always grabbed me and made me imagine that I’m on the trip that Nate and Jo are on today.

Nate on the river (right).

Many thanks to Stan and Kathy and the regulars at the Pekin Boat Club for the hospitality (and warm shower) they provided Nathan and Jo.

That’s the name of a blog that my son Nate and his girlfriend Jo (at the helm, below right) are using to spin tales of their current adventure.

Last week, they bought a 1985 Hunter 25.5 sailboat out of Muskegon, Michigan, sailed/motored it across Lake Michigan on a thankfully calm day and are now wending their way through Illinois following the path of the looper community (albeit more than a few weeks behind the main surge) with the goal of reaching the Gulf and 70 F temps by Christmas.

Visit Chasing 70 if you’d like to hear the stories of rookies navigating locks and dam(n)s, hail and oh the dreadful wind and rain and other challenges. And if you know any ‘loopers’ who make the trek up the east coast in spring, travel the Great Lakes in summer, and return to the Gulf through the Mississippi or Tennessee in fall, please pass the link along. They might have some good tips for these young adventurers. 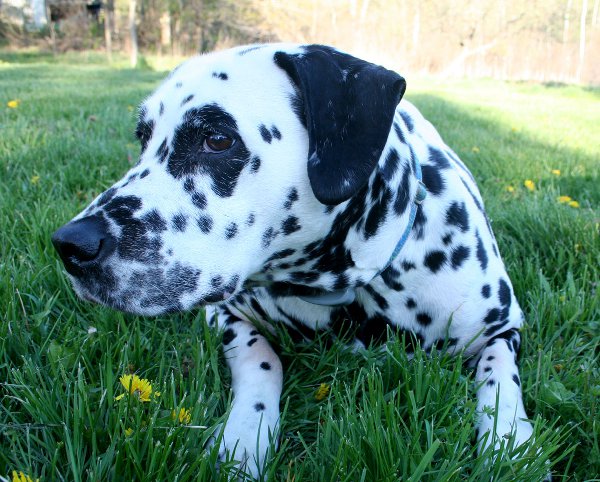 We have our daughter Corey to thank for bringing Fred into our lives. He was a stray, picked up by a rural animal shelter. He dodged his first bullet by landing in the Tompkins County SPCA’s no-kill shelter, where she was volunteering. He was a bit unruly, peeing on the rabbit cage on the way out when we took him for a test walk. But when Corey drew a picture of ‘Zorro’ (as he was known at the SPCA because of his mask) with the word ‘Please’ underneath and hung it outside our bedroom door, we couldn’t turn them down. He terrorized our other dog, Jade, for three weeks before they became fast friends. And he’s been family ever since. 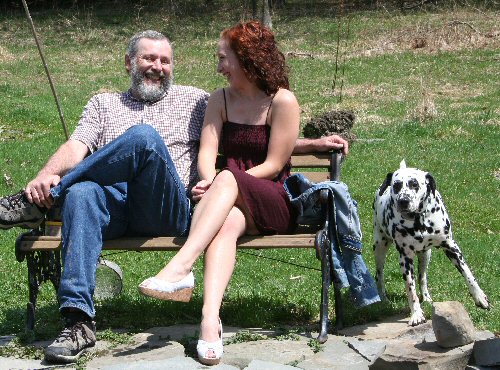 As I look back through old photos, I remember that Fred was a constant companion in the garden. In spring (he complements double bloodroots well) … 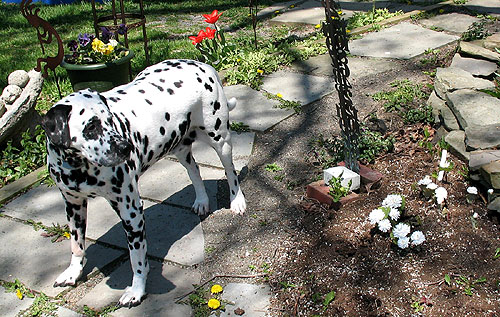 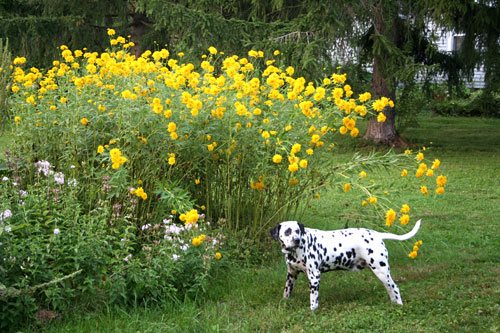 Fall (at sunrise, our morning ritual) … 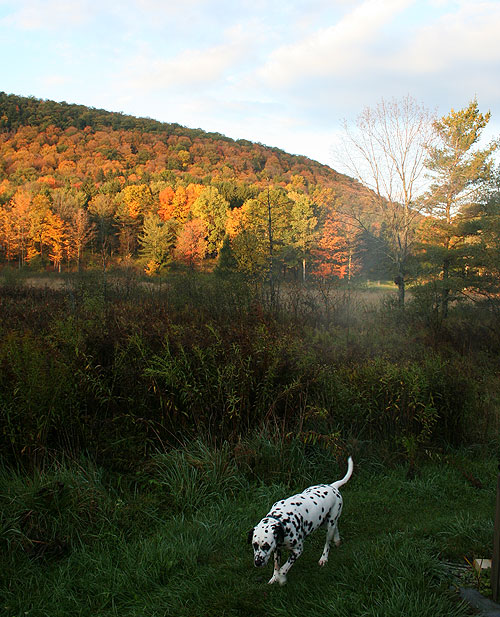 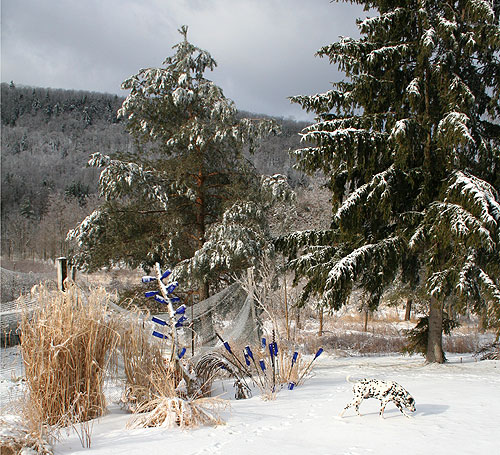 He dodged a second bullet when he had to undergo surgery for these bladder stones (the largest one is bigger than a marble) and developed complications. But he made a miraculous recovery. 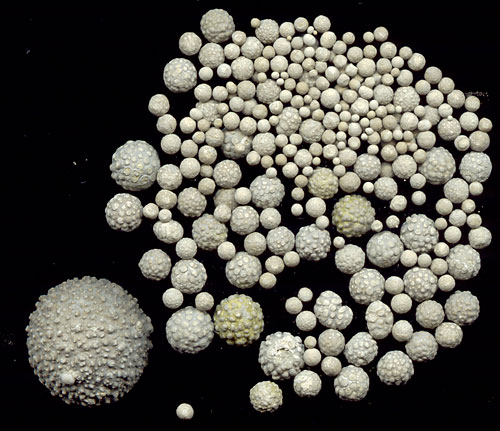 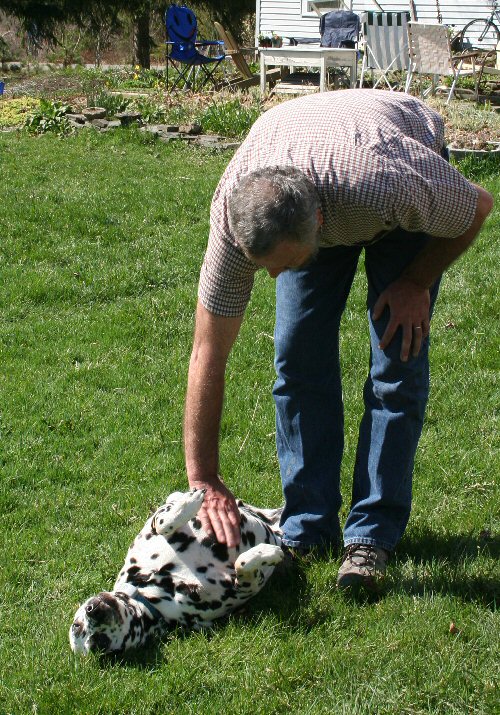 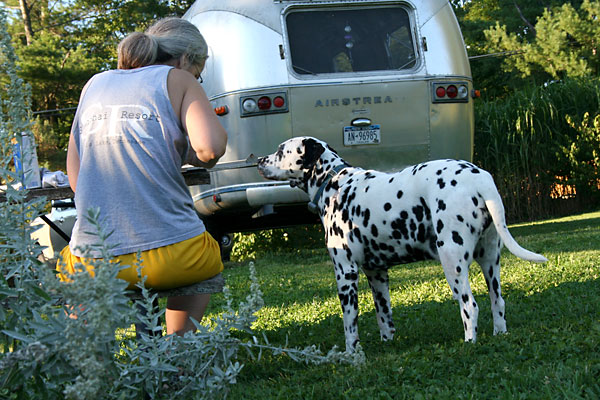 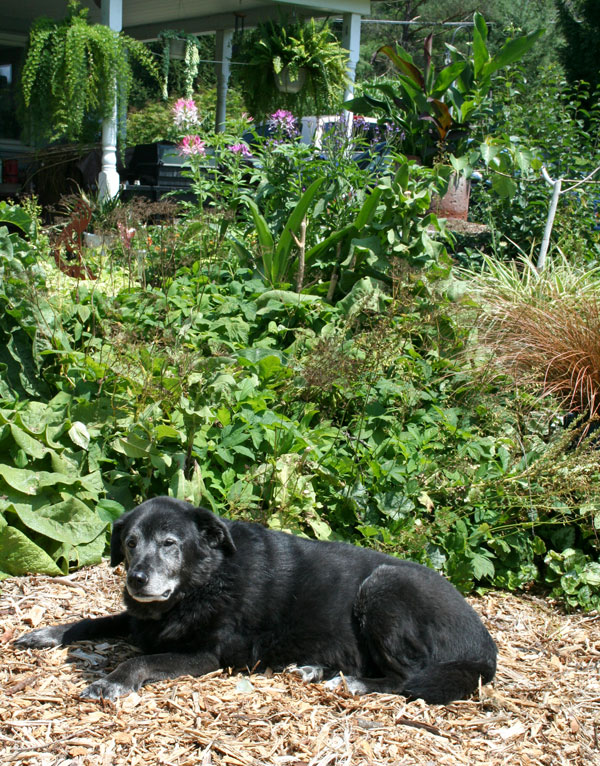 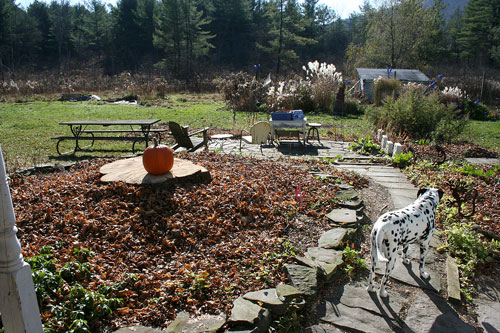 Fred loved going out in his red coat even when the weather was foul. 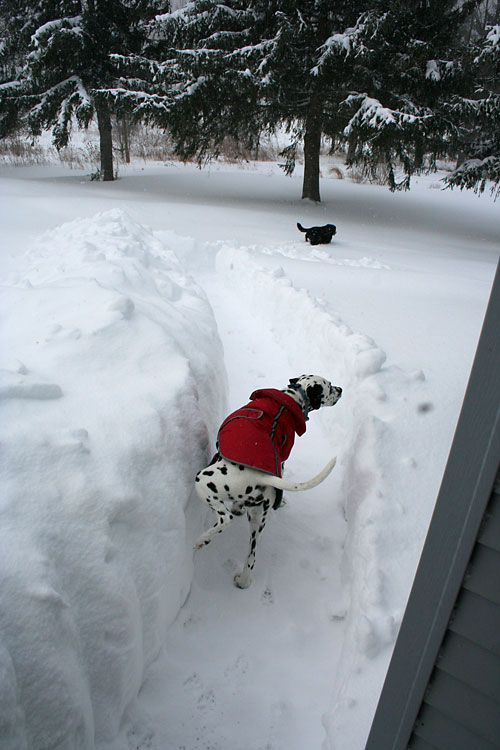 Fred loved running through the snow.

And we all loved Fred. 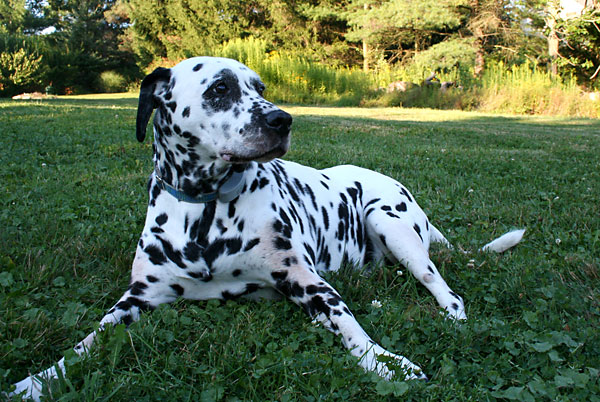 More than two years ago, Fred was diagnosed with a massive lung tumor. He had maybe two weeks or two months. But we had an amazing two-plus years instead. The last day of his life, he could not breath while lying down. The big guy stood tall until the end.

Thanks to all who helped us care for Fred over the years, especially Grandma Eunice and the folks at Fountain House Veterinary Clinic.

For gardeners and farmers, the earth moves on Wednesday

On Wednesday, the U.S. Department of Agriculture will unveil its long-awaited new “Plant Hardiness Zone Map” at the U.S. National Arboretum in Washington, D.C. The map – a vital tool for gardeners, farmers, researchers and policy makers – is expected to change in part to reflect changing climate patterns across the United States.

Cornell University, New York’s Land Grant university and home of the Northeast Regional Climate Center and the Atkinson Center for a Sustainable Future, has several experts available to discuss the significance of the changes to this decades-old system for planting ornamentals and crops. They include:

David W. Wolfe is a professor of plant and soil ecology in the College of Agriculture and Life Sciences, and the chair of the Climate Change Focus Group in the Atkinson Center for a Sustainable Future.

“For decades, gardeners have used Plant Hardiness Zone maps, based on minimum winter temperatures, to determine what plant species are adapted to where they live. The last version published by the USDA appeared in 1990. In 2006, the Arbor Day Foundation published an updated map using the same methodology of the USDA, which shows a dramatic ‘zone creep’ northward throughout the country.

“Gardeners like to experiment, and can lead the way in exploring what it is possible to grow in a changing climate. On the down side, some local favorite garden species may suffer, while invasive weedy plants like kudzu are likely to expand their range northward.”

Art DeGaetano is a climatologist and professor of Earth and Atmospheric Sciences, and the director of the Cornell-based NOAA Northeast Regional Climate Center.

“The northward march of the hardiness zones illustrates the continued warming that has occurred across the United States and around the globe in recent decades, particularly in winter. Projections for state-of-the-art climate models indicate that winter temperatures will continue to warm through the 21st century. Additional updates and changes to the hardiness map will be necessary in years to come.

“By 2080, the hardiness zones that currently cover the area from southern Virginia to Northern Georgia, may replace those that we see across New York in the current update.”

William Miller is a professor of Horticulture, and one of the world’s leading experts on floriculture and the physiology of ornamental plants.

“One thing I have learned from growing plants in many locations in the U.S. is that plants can’t read! Experienced gardeners are always pushing the envelope by trying new plants, and especially those that ‘aren’t hardy’ in their area. Really crusty gardeners sometimes say that they need to kill a plant three times to be certain it won’t grow in their area.

“Aside from global warming or simply more and better data leading to a more accurate map, there is always microclimate variation in any locale and a few feet alteration in planting site, better drainage, locating a plant around a corner, presence of snow cover, mulch, or protection from wind can make a huge difference in winter hardiness.

“Especially with herbaceous perennials, that are relatively inexpensive and in any case almost always a lesser investment than trees or shrubs, one should experiment and try to push the hardiness rating. You never know what might survive.”

MEDIA PLEASE NOTE: Professors Wolfe, DeGaetano and Miller will be available to talk with the media by conference call at 1 p.m. Wednesday, shortly after the USDA announcement. To participate, call 1-866-910-4857, passcode 858182. All three will also be available for one-on-one interviews following the announcement.

This hit my work inbox today. And there’s a webinar if you can’t be there.

WASHINGTON, Jan. 19, 2012—The U.S. Department of Agriculture (USDA) will unveil its new Plant Hardiness Zone Map in an event hosted at the U.S. National Arboretum on Jan. 25 by Dr. Catherine Woteki, USDA Under Secretary for Research, Education and Economics (REE). The map is an important tool for the country’s estimated 80 million gardeners, and those who grow and breed plants for them. In addition, many others need hardiness zone information, including agencies such as the USDA Risk Management Agency, which uses the plant hardiness zone designations to set some crop insurance standards. Scientists also use the plant hardiness zones as a data layer in many research models such as modeling the spread of exotic weeds and insects.

Those unable to attend the event at the Arboretum are encouraged to participate via webinar, wherein guests can watch a demonstration of the interactive map on their personal computers, and can call in to ask questions about the map and its features.

WHAT: Release of the 2012 USDA Plant Hardiness Zone Map

WEBINAR: To connect to the webinar conference via computer, go to https://connect16.uc.att.com/usda/meet/?ExEventID=86994646.
If you need to install the participant software for the webinar, go to
http://uc.att.com/support/download_attc_participant.html.