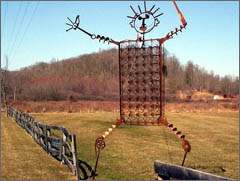 Great post from Dark Roasted Blend, one of my favorite image blogs:

Some of the World’s Strangest Fences.

To celebrate Labor Day, I was thinking Matthew Grimm and Red Smear’s One Big Union. But given what’s transpiring on the Gulf Coast, I figured Randy Newman’s more somber Lousiana 1927 was more appropriate.

Updated pub date to keep on top. Keep the people of the Gulf Coast in your prayers as Gustav bears down.

Set your TiVo/DVR. Next Sunday, Aug. 31 at 10:30 Eastern (check your local listings), PBS will be premiering the documentary, Atchafalaya Houseboat.

The Atchafalaya is a mysterious land, as much underwater as above. Its lush environment is home to alligators, egrets, black bears â€“ and for a time two people who yearned for a simple, natural life. Atchafalaya Houseboat, shares the experiences of Gwen Roland and her companion Calvin Voisin, who left civilization in the turmoil of the early 1970s for the unspoiled beauty of the nationâ€™s largest river swamp, Louisianaâ€™s Atchafalaya Basin.

Gwen is the communications director for the Southern Region of the USDA’s Sustainable Agriculture Research and Education Program, and we collaborated on a few projects back in my Rodale days. She’s also started writing online for Mother Earth News on Modern Homesteading & Sustainable Farming.

Gwen and Calvin were featured in a photo essay by C.C. Lockwood in National Geographic circa 1971. (That’s one of his pictures above, the one that woke me up when I saw it in a PBS ad while reading the political blogs early this morning.)

In 2006, Gwen wrote a book by the same name about her time on the houseboat and further travels during those times, which I highly recommend.

I got a little of the backstory from Gwen this morning:

Yes indeedy. An Emmy award winning producer picked up a copy of Houseboat in a Barnes and Noble while waiting for her kids to finish with soccer. It gave her an idea for a documentary with no narrator, just my voice, which she had never heard, and old photos mixed with new video. Took me out to reunite with Calvin and CC Lockwood, came to Georgia and filmed me with my critters and the farmers market, etc. I questioned her judgment but figured as long as no one asked me to hold my stomach in or wear girly shoes, it wouldn’t do any harm and I’d have a nice memory to look at in the nursing home someday.

And you will love Gwen’s voice, and her story. Tune in.

One of my all-time favorite ‘contemporary old-timey’ songs, though the minor version halfway through took me by surprise.

They take their name from Ithaca being ironcially crowned as one of nation’s most evil cities during the hysteria of the early ’00s. If you’re brave, you can see them at the Chapter House tonight. (It’s the first weekend with students back in full-force, so wear protective gear.)

Much more old-timey goodness from this set via YouTube.

There’s been much gnashing of teeth over heucheras lately. Nan sang the Heuchera Blues over at Gardening Gone Wild recently, concluding, “A few years ago, I tried to change my expectations and think of the fantastic foliage heucheras as just really expensive annuals.”

I’ve changed my expectations, too.

I’ve always been skeptical of catalogs. But for some reason I suspended that disbelief for heucheras (and tiarellas and heucherellas) when I first discovered them. I thought that I could grow bushel-basket-sized plants just like the pictures in the catalogs. But I soon learned that Upstate New York is not the Pacific Northwest. I like to focus on plants that want to grow here. And heucheras are reluctant residents here.

Why? Probably the biggest factor is my heavy clay soil that heaves during our increasingly open and variable winters. Even where I’ve greatly improved the soil, it’s a late-winter ritual to look for heaved heucheras and shove them back into still frosty soil before their roots dry out. I’ve also got some in dry shade which they really don’t seem to like much during summer, since I don’t water ornamentals in the ground once established.

Unlike Nan, I don’t treat them like annuals. But now I look at them as woodland jewels — much the same way I think of minor bulbs. From time to time, I get down on my hands an knees, pluck off a few ratty leaves and behold what’s left and say, ‘That’s really cool.’

And I try not to grow them as specimen plants. They are usually surrounded by sweet woodruff, lamiums or other shade-loving groundcovers. That way, they don’t stick out like a sore thumb when they aren’t looking their best.

This is one of the few whose names I remember, H. ‘Monet’. Though it’s stayes small, it’s hung on for several years now. Looks better in person.

One year, I collected a bunch of seed from the half-dozen or so store-bought heucheras I had in a patch (most long-gone now) and planted the mixed seed in cells. I got a dozen or so plants that I planted in a shady patch I call ‘Craig’s Mix’ on the north side of the house where they usually struggle under the shade of a massive bleeding heart. These are my favorites.

If memory serves, this is Heucherella ‘Kimono’. The foliage reminds me of some geraniums.

I’ve also got many heucheras with purple and brownish foliage, though I don’t like them nearly as much as the green ones touched with silver and red.

So even if you can’t grow massive heucheras, do grow some. And get down on your knees and be thankful for what you get.