Sunday before last, our Adirondack Chapter of the North American Rock Garden Society was treated to a spellbinding presentation by Latvian Bulb expert Janis Ruksans.

Now I’ve had my eyes glazed over by what we called back in the days of carousel slide projectors the ‘two-tray presentation’ — photo after photo ad nauseum until it’s all just a blur. But the three PowerPoints Janis presented will stay with me for a long time.

His first presentation was an overview of the incredible bulbs he’s gathered in his plant explorations throughout the former Soviet Union. It included this startling image of Anemone ranunculoides mutations gathered from around Chernobyl. Scary.

This Scilla armena caught my eye among the scores of other images of unusual bulbs he showed.

The first presentation was followed by hour-long presentations on fritillarias and corydalis. They were all amazing.

I wish I could point you to Janis’s website for more information. But he doesn’t have one. He puts out a print catalog in January. Propagates plants until August. Then fills orders. If you want his catalog, you have to send $5 cash (with the declining dollar, maybe he’ll raise that this year) to: Janis Ruksans, Bulb Nursery, P.K. 441, LV-1010 Riga, Latvia. I’m trying to talk him into letting me post his catalog online. But it looks like he gets all the business his family needs the old-fashioned way.

I haven’t had a chance to read it yet, but friends I trust tell me his book published this year by Timber Press, Buried Treasures: Finding and Growing the World’s Choicest Bulbs, is a great read. It will be on top of my reading pile before the snow flies.

Colony Collapse Disorder (CCD) hits the mainstream media in this 60 Minutes segment via Crooks and Liars.

… that Julie over at the Human Flower Project chose one of my images to add to her tribute to the late poet Jon Anderson.

Oh yeah. Heavy frost last night. The banana tree is mush. It will be a dahlia-packing weekend this weekend.

Things are busy. Not much time to post. But here are a couple of pictures from last weekend with some fall color, which is late and mediocre this year. 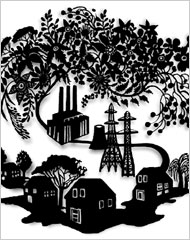 IF the government wants to reduce its dependency on imported oil and, in the words of the Department of Energy, â€œfoster the domestic biomass industry,â€ it has only to stop by my backyard with a pickup. The place is an unlikely but active biomass production center â€” especially at this season with countless autumn leaves eddying in every nook and cranny â€” and Iâ€™ll happily donate my production to the cause.

I have two concerns with his reasoning:

Cooper says he’s overwhelmed by how much biomass he produces. But do you know any other gardeners who complain about having too much compost? Sure, put your woody waste on the curb for local recycling. But for goodness sake, rake the rest onto your beds, around the base of your trees and shrubs, or put it in a modest-sized compost bin.

Improving your soil is a better use of that biomass than burning it.