Have I really neglected this blog since Labor Day?

Apologies. Life has been hectic. Plus I’ve been able to scratch my blogging itch some at work through the Cornell Horticulture blog. The little vacation from blogging here has made me start yearning for spring already and getting back to shooting photos and creating scans.

Following Les’s lead at A Tidewater Garden, I figured I’d pull together a quick collection of favorites from the past year, drawing from both blogs. In most cases, you can click on images for a larger view.

With a corm nearly the size of my fist, this cyclamen reliably pumps out blossoms on the kitchen windowsill this time of year.  More manipulations of this scan. 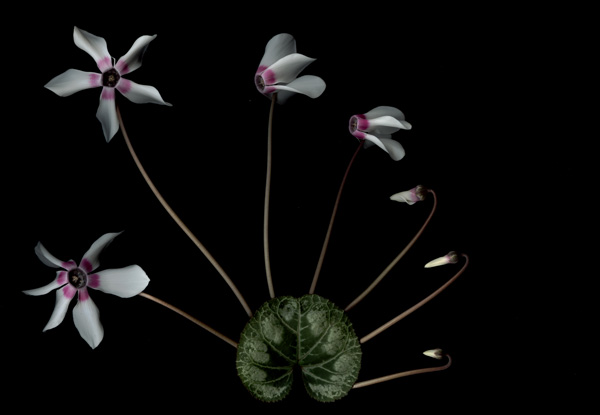 This is why I long for spring: The chance to get my knees muddy shooting little things. Hard to chose just one.

Below, an Eranthis — a special variety though I don’t know its name. 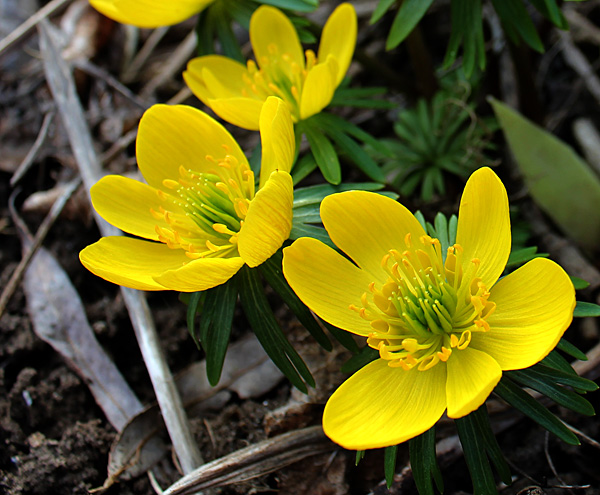 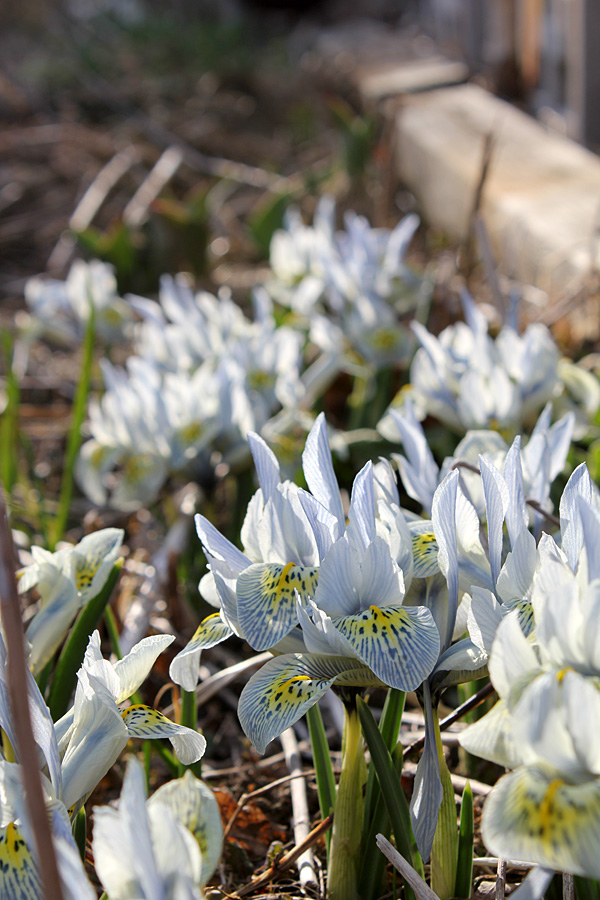 Scan of daffodils, Leucojum and tulips the deer missed. 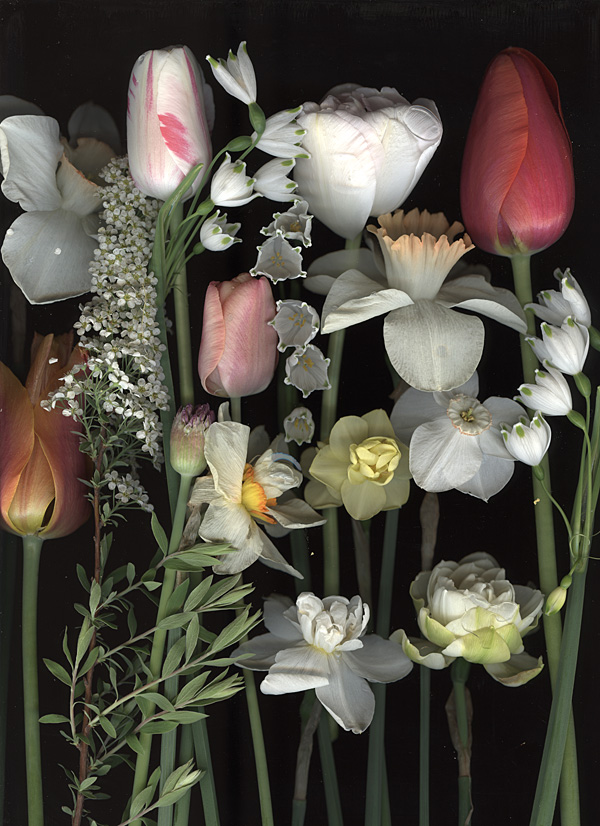 This one pumps out the prettiest flowers. Good thing. It’s leaves are butt-ugly. 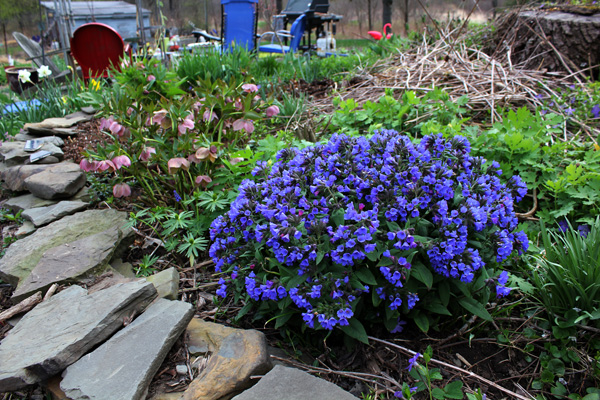 Kaleidoscope mosaic with Aruncus, among others.  Original scan. More manipulations. 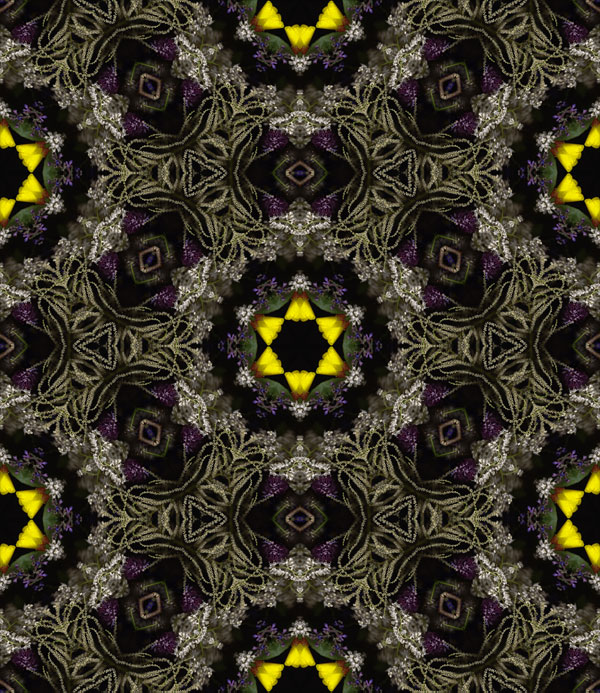 At least that’s what John Scheepers is calling it these days. One of my favorites. 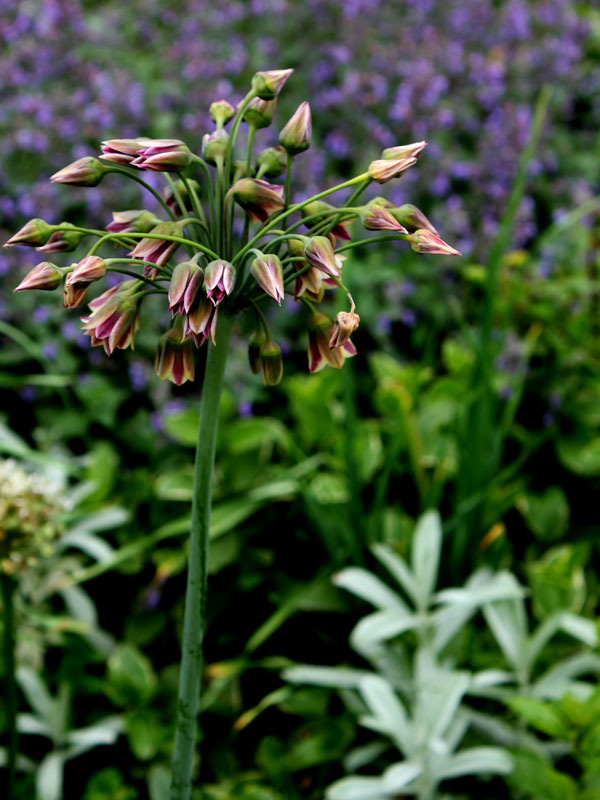 Tools of the trade

Shot this at a weed control workshop at a field day for gardeners at Cornell’s Thompson Vegetable Researcg Farm.  Read more.

Every fall, students in the Art of Horticulture class build a sod sofa on campus.  It’s one of my favorite afternoons, as I get to shoot stills and usually make a time-lapse video. One of the first posts I wrote on this blog was about how much fun I had helping ‘Stickwork’ sculptor Patrick Dougherty with his installation in Collegetown. He returned to campus in October for a series of events including a hands-on community build at the Ithaca Children’s Garden. You can view a time-lapse video of the build below or view one of his talks, Stickwork: Primitive Ways in an Accelerated World.

What would I do without this class. My second favorite day of the school year (after sod sofa day) is when the students in this class present their final projects. I usually give a talk about digital art, and this semester I was so pumped that one of the students was inspired to try some manipulations. (You can view them here.)  You can also view most all of this year’s (and previous years’) projects at the Art of Horticulture gallery page. A couple of things I discovered as I was reviewing the year that I should have plugged here earlier:

Here’s a cool idea I found surfing around the other day: Turn your bulkhead and steps into a greenhouse.

The Contrary Farmer, Gene Logsdon has a nice piece on hoes on his blog over at organictobe.org. The piece is from 1985, but I guarantee you that even more than 20 years ago Gene had spent more time at the business end of hoes than any 10 of us combined.

I had the pleasure of working with Gene back in the day. He’s been a prolific writer of books and articles over the years. I think many of you will enjoy his writings, and these posts are a good place to start.

This is my entry in the hoedown Carol is hoesting over at May Dreams Garden. While I lust after her hoe collections (probably stem from my years writing about cultivator implements for farmers), I’m really not a tool collector. I tend to find a few that I like and that work and remain loyal to them.

Above are the tools that are on the top of the pile or closest to the shed door. There are a few more specialized tools that really come in hand for specific jobs (breaker bar, post-hole digger, pocket pruning saw, loppers) or ‘go without saying’ (lawnmower, leaf rake). But these are the tools that get used.

Left to right, front to back (more or less):

Felco pruners – Not pictured, because they were in my back pocket while gathering up the other tools for the picture. ‘Nuf said.

Weed popper – I don’t even know what this tool is called. If you saw my beds, you’d know it wins the award for most under-used tool. (Don’t even look at the lawn this time of the year.) But if you really want to get a taprooted weed by the roots, this tool works pretty good.

Fiskar fabric shears – My seamstress mother is spinning in her grave. They’re great for cutting everything from flowers to plastic deer fencing. Wonderful for deadheading, not that I do a lot of that, either.

Bulb planter – I don’t plant enough to justify the longer version, but this beats the heck out of planting with a trowel.

Trowel – I think I got this through Smith and Hawkens at least 25 years ago. I really couldn’t afford it. But among my first gardening lessons was I can put more force onto cheap trowels than they can take.

Flex-tine rake – Perfect for raking up fine seedbeds for solid-sowing of greens. Once crops are up, you can use it to ‘blind weed’ small weed seedlings while they’re just germinating without wiping out the crop.

Serrated knife – I think this was touted as ‘Japanese’ when I bought it. Makes short work or divisions that can’t be teased apart. Sometimes wish the blade were longer. But it saws right through most anything.

Digging fork – Probably the most expensive took I’ve ever purchased, even though I don’t use it all that much. Aerating beds. Some digging.

Stirrup hoe – Probably my most used tool. I use it to weed and rake soil around. If you could only have one hoe, this would be the one I’d choose — having not had a chance to try out Carol’s collection.

Half-moon edger – As you can tell by the fine iron oxide patina, another under-used tool. But there’s nothing like edging a bed to spruce things up a little. The makes short work of the chore, though I’d love a longer handle. Also slices through the Invisible Fence cable with ease.

Garden cart – Gardenway cart that’s more than 25 years old. The plywood is starting to get funky, but it’s been a workhorse every year, and most of those years stored outside. Old half-sheet of plywood turns it into a convenient mobile potting- and work-bench.

Kim over at A Study in Contrasts had a great post a few days ago, Urban Excavating, where she describes the unusual things she’s found digging around her house. It spawned a great thread.

Who hasn’t dug up something weird? When I lived in town, what looked like a 4-inch patch of slate turned out to be a 10′ x 15′ rough flagstone patio buried under sod that grew up between the cracks.

Here in the country, the theme is tools. Above are three that I had stashed behind the shed after unearthing them in the vegetable garden: A scythe blade, a stovetop flatiron, and a C-clamp. I also found some sheep shears, but they’re buried somewhere in the shed.

In one of the old dumps out in the woods, I found a great enamel chamber pot. Makes a great planter.