One of the great things about living outside a college town is the vibrant culture. This weekend was the Ithaca Apple Festival. The Commons (a product of ’70s revitalization efforts) had food, fun and live music all weekend. A favorite stop every year is a booth organized by our Department of Horticulture grad students raising money by selling apples, cider and pawpaws and raffling off a giant pumpkin. (Note to Chad: Don’t forget pawpaw trees next year.)

I love the scrap iron pony. Similar sculptures (recycling at its best) are scattered around the Commons and downtown.

Friday night, Air America Radio host (and frequent commentator on to Keith Olbermann’s Countdown and other new programs) Rachel Maddow brought her radio show to Ithaca’s State Theater. Rachel frequently features politically active artists and musicians on her program. So it was no surprise that local favorites The Burns Sisters performed this song at the show. (This version from the 2006 Philly Folk Festiva.) 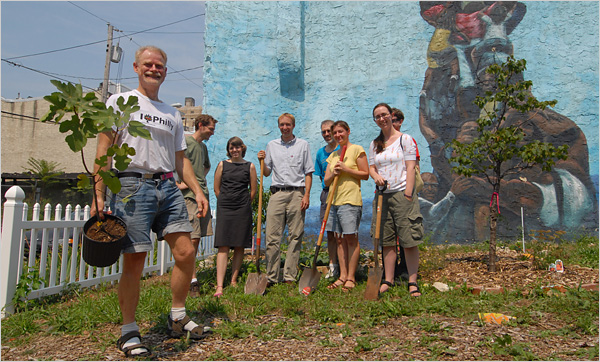 I don’t usually read the NY Times real estate section (I guess I guy can dream, but I’m never gonna live in any of those houses). So I missed this article about former-Ithaca activist Paul Glover’s efforts to plant orchards on vacant lots in Philadelphia.

Susan M. Wachter, a professor of real estate finance at the Wharton School of the University of Pennsylvania, … found that cleaning up vacant land raised the value of adjacent homes by 20 percent.

[She also] found that planting trees on residential blocks citywide raised property values on the block by almost 10 percent. The increased market values are attributable to a â€œcombination of landscape changing dramatically, and also a signal that someone is reinvesting in the neighborhood,â€ Ms. Wachter said.

The article mentions similar pioneering efforts in Austin and other cities. 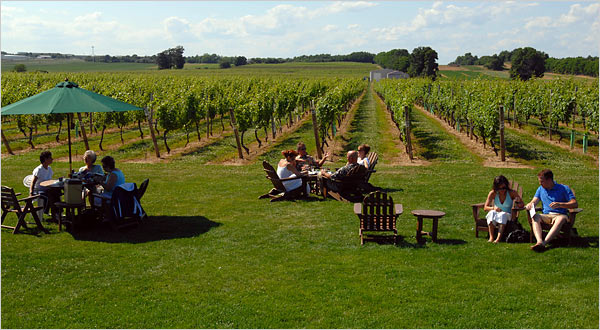 Oh Oh no. Long Island’s North Fork wineries are finding winos and oenophiles don’t mix, according to the NY Times.

inebriated group at the Palmer Vineyards here who hopped off a hayride and began gallivanting naked through the vines. Then there were the drunken customers at the Pugliese Vineyards in Cutchogue who jumped into the shimmering lake next to the elegant outdoor tasting area. And the bachelorette parties that often culminate in tabletop dances, to the horror of nearby oenophiles sniffing or sipping the local chardonnays.

Apparently they’re a problem here in the Finger Lakes, too, spurring the formation of “… the Safe Group Wine Tours Initiative. The program issues warnings to groups that are considered out of control and will bar repeat offenders.”

Interesting article in this morning’s Washington Post about Harry Swartz, a Cornell grad at the University of Maryland who’s breeding ‘better’ strawberries, specificially ones that can be harvested mechanically.

It sounds like Swartz hasn’t forgotten about taste. But like a flower-breeder looking for that rare sport that’s going to make a mint, Swartz found his in Spain — and it had nothing to do with flavor:

One day, while slogging through a field of 12,000 plants in Spain, still recovering from a bottle of wine the night before, mind numb at the end of the day, he stopped. He did a double take: He was looking at the perfect plant. All the berries were ripe at the same time, and it had single leaves rather than clusters.

He spirited the plant away and is now working on commercializing it.

Swartz’s company, Five Aces Breeding, is the privatized version of the university’s small fruit program. … “You can’t make five aces without a wild card,” he said. “We use wild species — that’s our wild card.”